I became very bored of Contract Wars around a month ago. I had played all of what I considered to be the meaningful content, around six months of hard no lifing (3-5 hours/day) spread over three accounts, and had purchased all of the guns that weren't redundant. It wasn't looking good for Contract Wars.

I have occasionally been checking CW for new weapons or maps, and I was pleasantly surprised to find that yesterday the HK 417D had been released and it looked refreshingly original. I will get into reasons why it looked good later on, but my immediate disappointment was that it was sold out for the two days that I had looked. I am more than happy to say that today it was restocked, and I managed to purchase one.

Besides this weapon being the sexiest in the game, the description of the weapon says that it is basically an enlarged version of the HK 416c Rifle. This initially peaked my interest as I have always liked the "easy going", relaxing fire rate of that gun. However, it never really packed enough punch for me to really use it against higher leveled, armored players.

Rather than calling it a larger version, I would lean towards calling it an older brother bordering on adopted. There are some really nice areas where this gun shines, setting itself apart. But there are also some other areas that are eerily similar to the 416c.

Following with the tradition of long range rifles in Contract Wars, you will need 250 Longshots in order to complete the HK 417D's weapon task. Also following the long range rifle tradition, you do not get to have a silencer. However, you do gain a very nice ACOG sight with the equivalent magnification of 4x. I'm not quite sure on the stat bonuses of the gun's w-task, but it should only reduce your recoil. Accuracy should already be at 100 if you have the accuracy skills.

For your exact build, please use the link that Noboty has provided in the CW Guide. This image is assuming you have all critical gun skills + gunsmith. 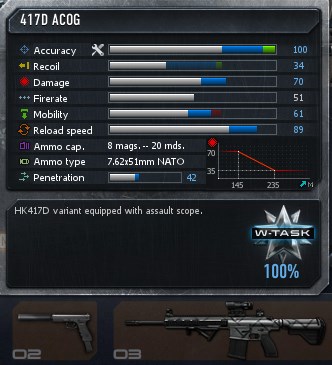 Looking at the RANGE, it is quite obvious that this is now the most powerful long range automatic rifle in the game. Beating out the previous holder, the AEK Rakurs. The 145m (with +15 range), maximum damage rating, is quite phenomenal. Currently, this covers every single map size available. There is no where this gun will be shooting at less than 70 damage (Lighthouse will bring it down to 60ish).

After minimum damage, the second thing I always look at is PENETRATION. The way that CW works, 30+ penetration will go through crates, boxes, and other small wood objects. However, 40+ penetration is where a gun will shine. At 40 pen., you are able to shoot through quite a few larger buildings. This includes the barn on OSM, both of the OSM huts, and some metal objects on Evac (I think the objects are bugged).

Though there are many positive traits that a gun like the HK 417D possess, there must be weaknesses in order for it to be balanced. RECOIL is less than stellar, but borders on average once tasked. If you have gunsmith, recoil becomes acceptable. Recoil through the scope is quite noticeable, and it is advised that you limit your shooting to 1-3 round bursts. For those of you who know how the AK12 fires, visual recoil is linear; running from the front of the weapon backwards. In a gun like the AEK Rakurs, the visual recoil is vertical; running from the ground upwards. Luckily, the recoil is linear. But it is still quite noticeable.

There are two options for SIGHTS. Iron sights, and an ACOG 4x optics.
They are better viewed then talked about, so I will provide two images. 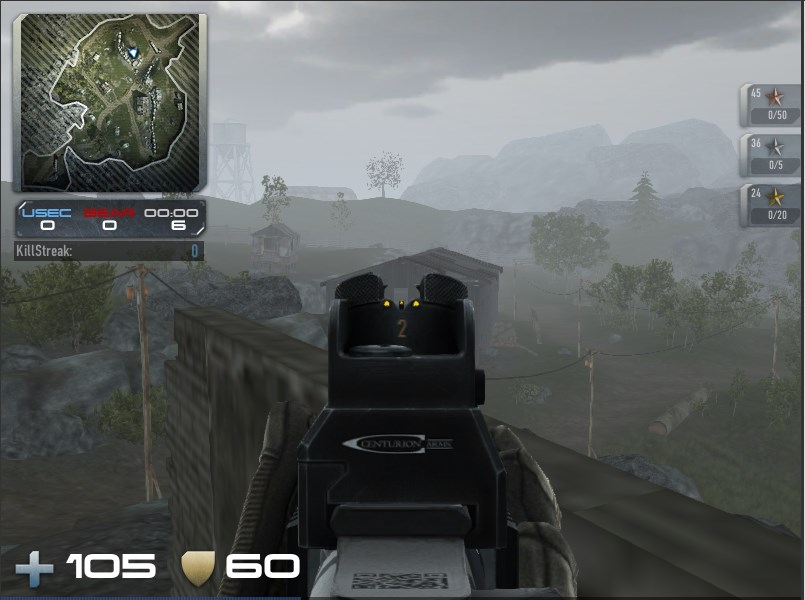 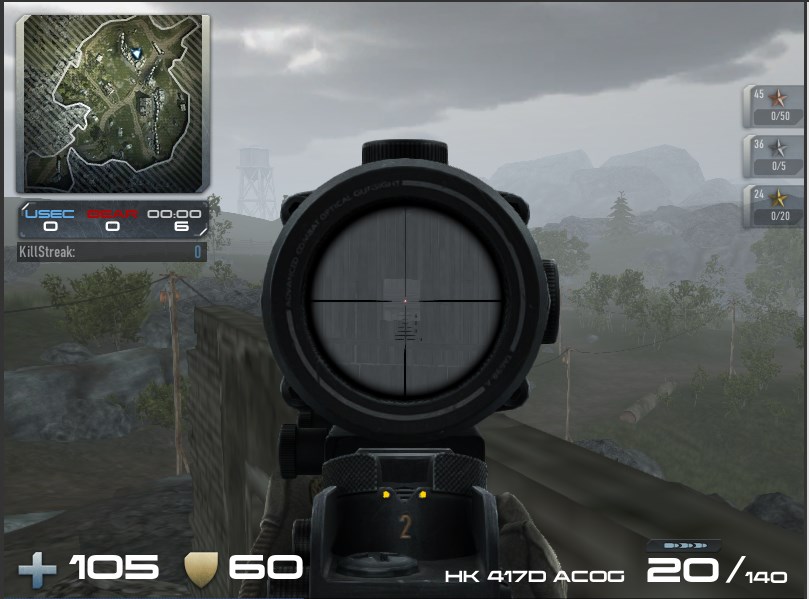 To finish off this section, there is a group of stats I call "secondaries". They don't directly affect the kill power of a weapon, but they do play a role in gameplay. The first of the three is MOBILITY. The 61 mobilty (tasked) offers itself around the t3-t4 mark with comparable weapons, it is noticeable, but not detrimental to the weapon. RELOAD, on the other hand, is outstanding. Coming in at a whopping 89, this gun is almost noveske-ish in this aspect. It fits perfectly with the 20 round MAGAZINE, as you'll be reloading quite often with this weapon.

A good gun? Definetly. It has its competitors, but in general, the range, minimum damage, and reload speed trump them all. The two most comparable weapons that I have used or seen, are the AK12 and the AEK Rakurs. A quick stat comparison can show you the differences, but in my opinion this gun easily beats both of them.

The overall HANDLING of the gun is quite nice. It offers a hybrid of AR and Sniper Rifle. There is 100% accuracy in semi auto, and quickly tapping the mouse appears to be more accurate than 3 round bursting. I absolutely LOVE how I can quickly snipe someone, and also go back to a very deadly AR for the guy behind me. Currently, this gun has been living 50% of the time in semi-auto. When sniping, muzzle flash is a problem, but this gun has much better flash compared to others (AEK I'm pointing at you!).

If you have 495 GP laying around, or are bored of your guns, I recommend giving this one a go. I am happy with my purchase, and it will be my primary weapon for large maps, but also will be getting use on Evac.

If you read this far, you're a champ! 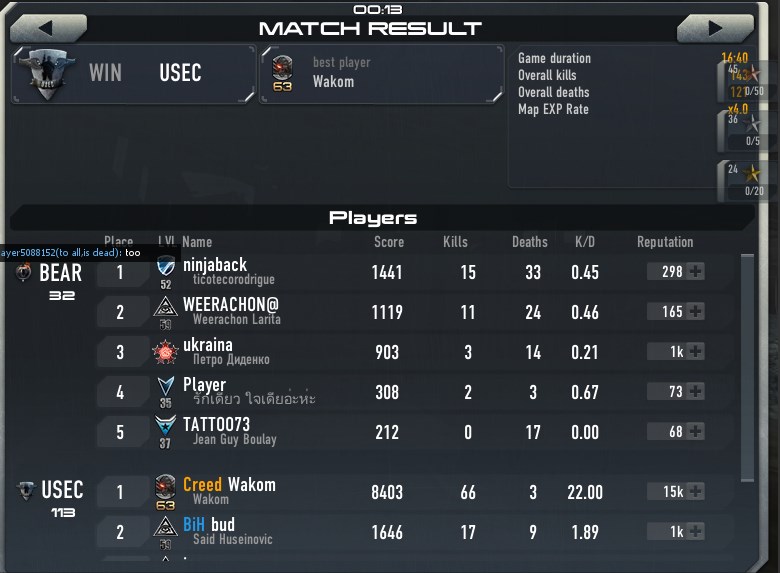 Thanks for the read. 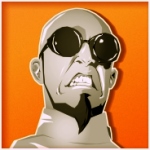 Are you still planning on getting it? In my opinion, the AEK and the HK are pretty different guns. HK is more sniper/long range, where as AEK is better at medium range maps, and not as good at scoping.

Good guide! Can't wait to get back into CW with my new pc! 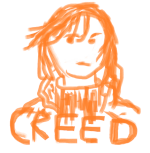 I bought this gun, so far only 21 longs, meh. but it will be worth it for the w task. just wish it was a little easier to see through the ironsights.

Mr. Default wrote:I bought this gun, so far only 21 longs, meh. but it will be worth it for the w task. just wish it was a little easier to see through the ironsights.

I quickly figured out that the iron sights do not work. I went to parkside, set it to semi-auto, and tapped from the hip at peoples heads. Worked quite well.

I don't believe in iron sights.

When I first started playing this game back in August of 2013, the first "good" gun that I got was the MP5 spec. It probably has the best iron sights in the game, and I was always disappointed when I tried other guns. The actual sight is extremely skinny, so it almost acts like a rds because the field of view was so good. That being said, it was the only thing that the gun had going for it.

Here's a sample of the irons on that gun.

As far as iron sights go, i hate this gun. I need someone to task it for me, unbearable.
I've tried the hipshot camping, doesn't work well for me, and the iron sights dont help either. Anyone willing?

Mr. Default wrote:As far as iron sights go, i hate this gun. I need someone to task it for me, unbearable.
I've tried the hipshot camping, doesn't work well for me, and the iron sights dont help either. Anyone willing?

That's what I felt like as well when I first got it. I was beginning to understand why it was only a tier 3 weapon. But once I tasked it, I became confused to why it was only in tier 3.

sure It's only longshots, but once you try a longshot with its ironsights...oh boy

hip fire
from close range
don't need to be *that* far away for longshots.

most my headshots in close quarters end up being longshots in-fact.

just go to parkside and camp spawns. The distance that is required for a spawn to activate is guaranteed longshot distance.

tasked this biatch a few days ago, ganna go wreck some people...I love this gun, thanks for the guide, Third.